Kas-Pressknödel (panfried cheese dumplings), are an Alpine hiker’s delight. They  are often served with a potato salad, cucumber salad, or sauerkraut to juice them up a bit. These “cheesy dumplings” are delicious either way. I have this recipe from my sister Kathi. If she cooks it, I guarantee, it’s quick-and-easy. 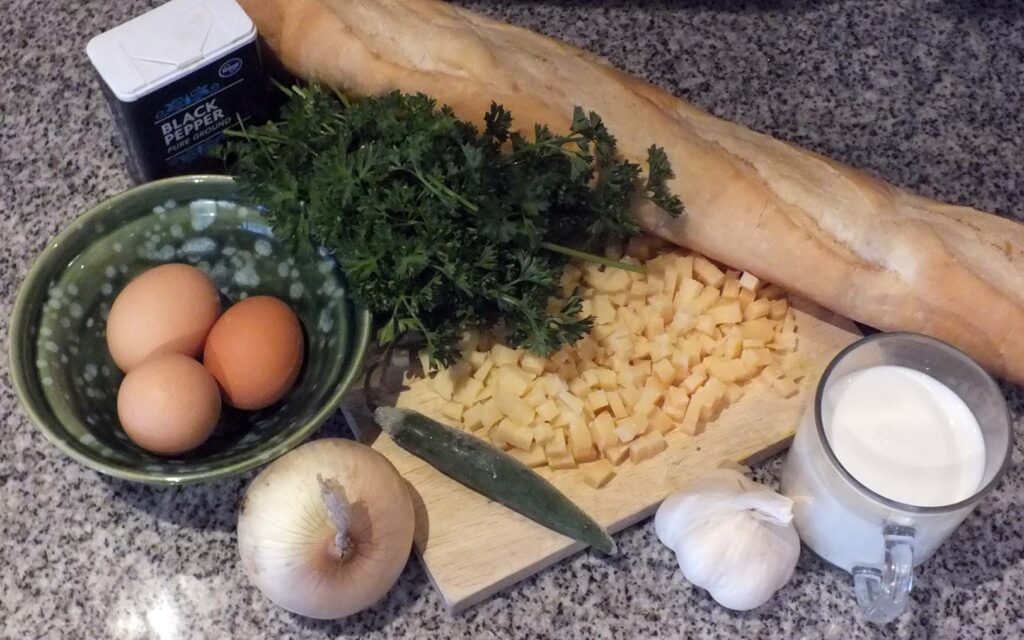 The hardest part of this procedure: slicing up the French bread ca. 5 mm thick, since no “Knödel-Brot” slicers exist in America. Then pour the warmed milk over the bread chips and let it soak in. 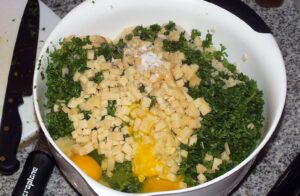 After 30 minutes add all the other ingredients and mix up the paste by hand. You should be able to form palm-size balls to fry in your heated pan. Or you can drop portion-sized piles into the hot oil with a spoon. Cook them on moderate or low heat to a crispy nice color on both sides. 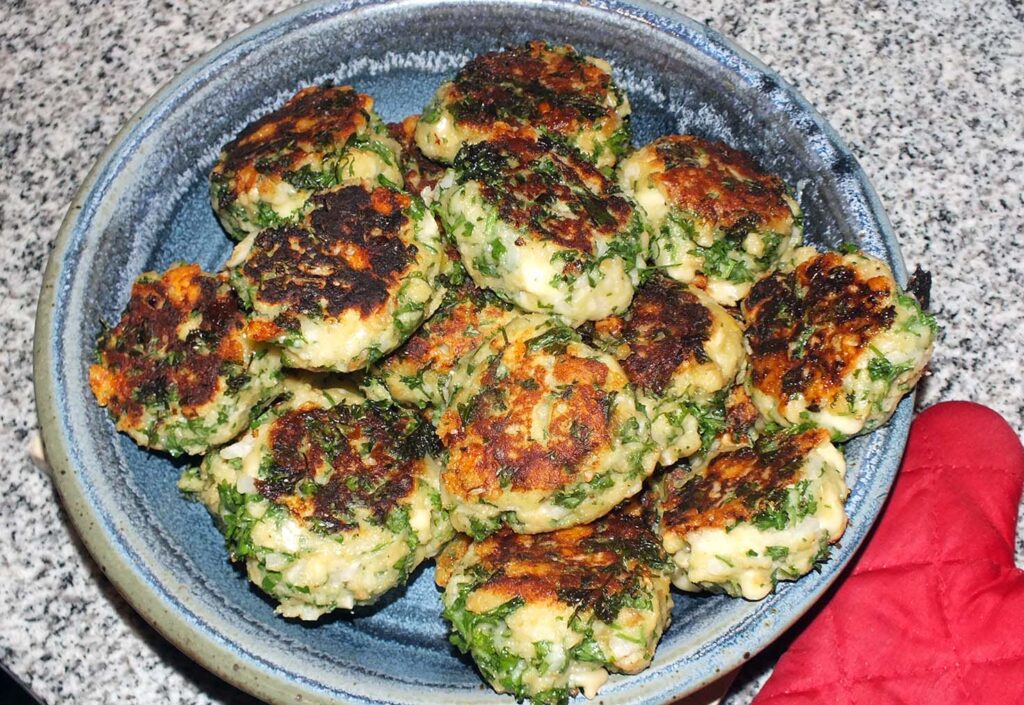 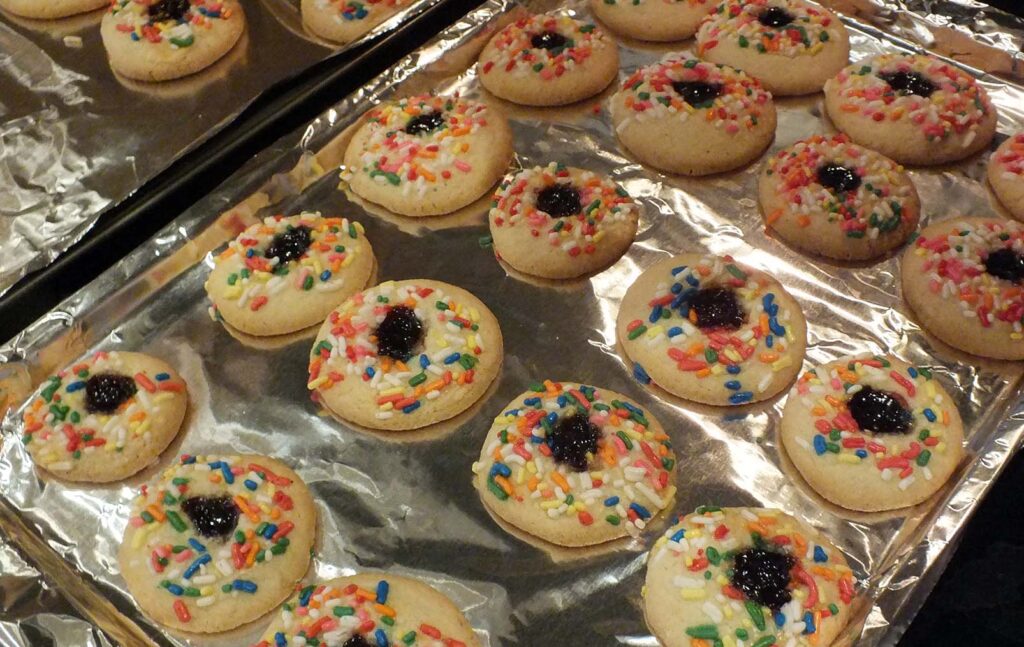 These Sparkly Thumbprint cookies are delightful on any occasion, not only Christmas. They have been adapted from a traditional German recipe, “Husarenkrapferl.”

Pile the dry ingredients on your work surface (flat counter, or we use a large wooden board), make an indentation for the eggs in the middle, chop the butter in pieces and arrange the flakes around the pile. Mix the egg with the dry stuff and gradually knead all the ingredients together into a cohesive, smooth ball of dough.

Production:
Divide the dough in 4 parts, and roll each one into a 1-inch-thick sausage. Then cut the sausages into 1-inch-long pieces. Voila! Then roll each piece into little balls.

Decorating:
Dip each ball first into the egg white, then into the sprinkles, and set them on a baking sheet. With the end of a cooking spoon, make an indentation into the sparkly balls. Then fill each hole with a dab of raspberry jelly.

Baking:
Bake the Sparkly Thumbprints at 325 F for about 25 minutes. They should be golden brown. (If you were overly generous with the butter, as we were, they may turn out a little flat.) 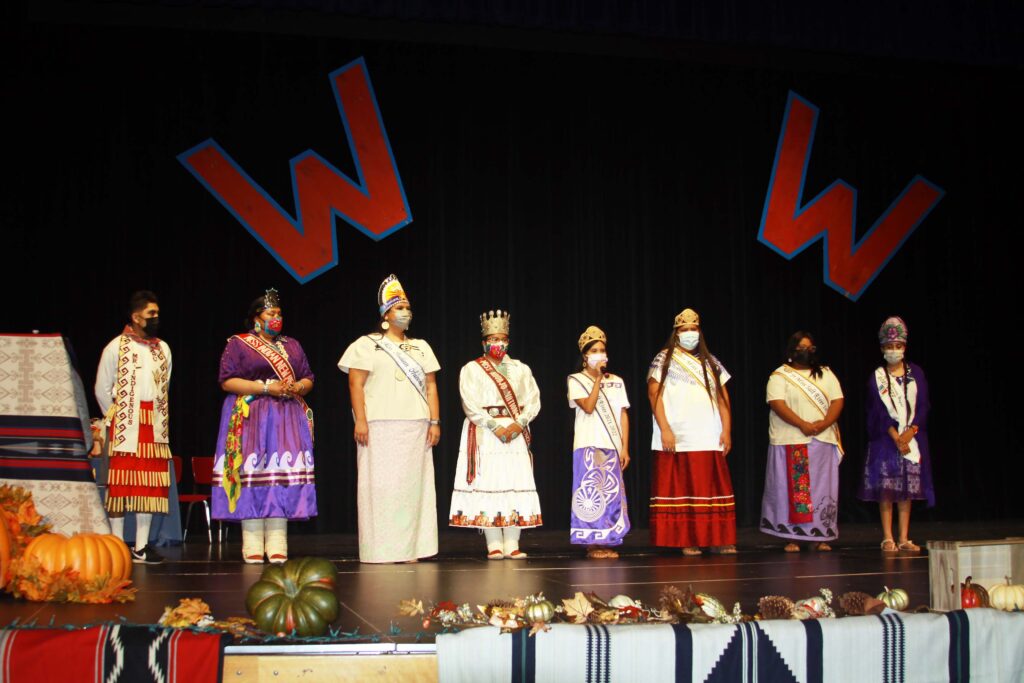 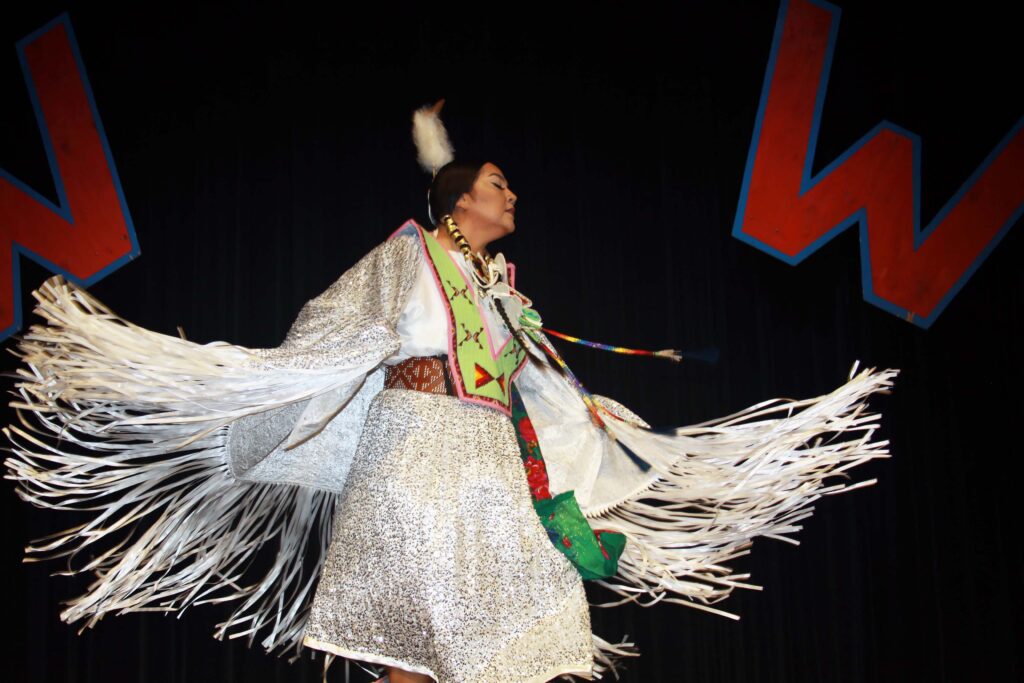 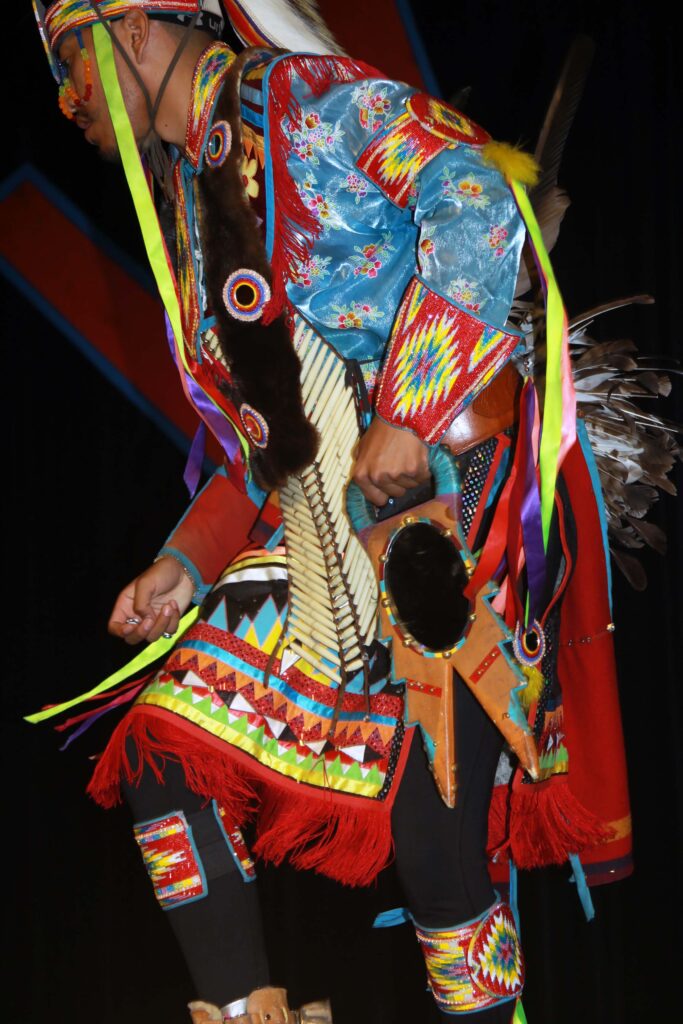 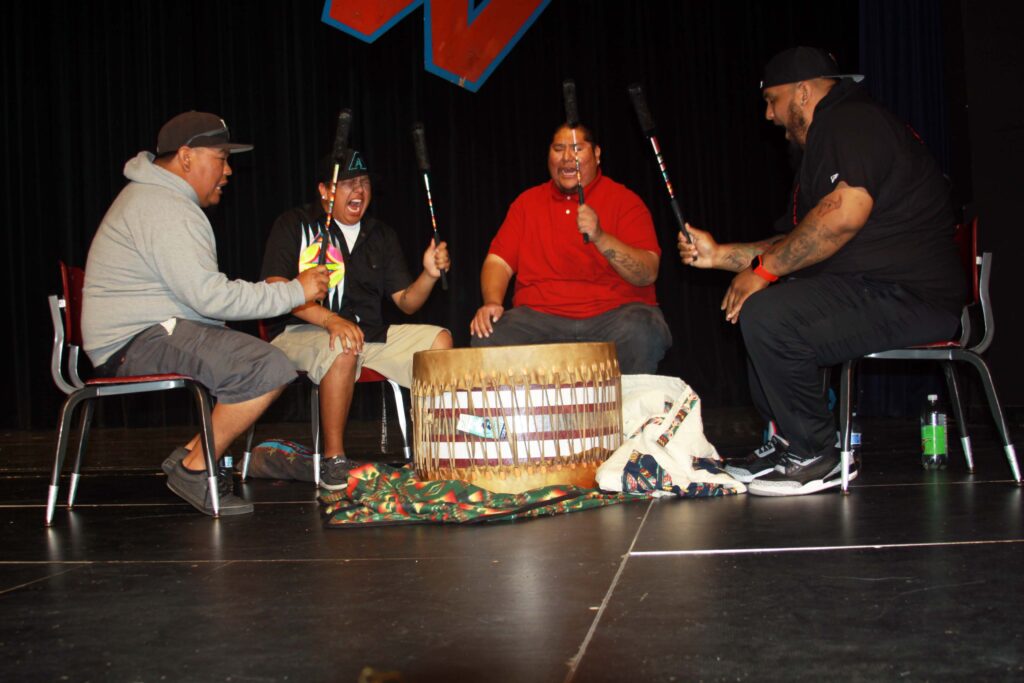 The Drum Group (above) fired up the spirit of dance. Then the Traditional Akimél O’odham Singers (below; Salt River Pima) invited everybody to join hands for a social dance. 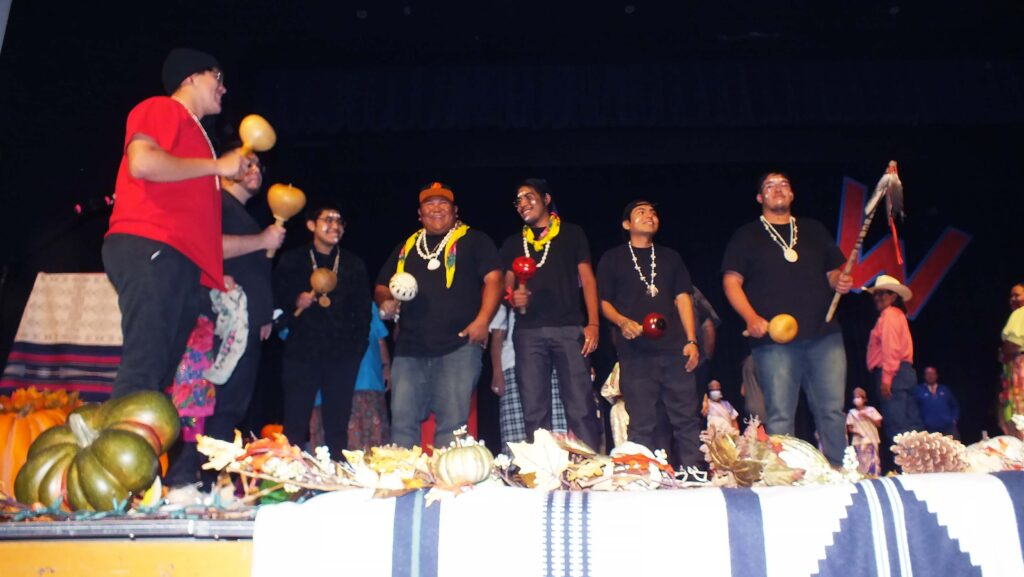 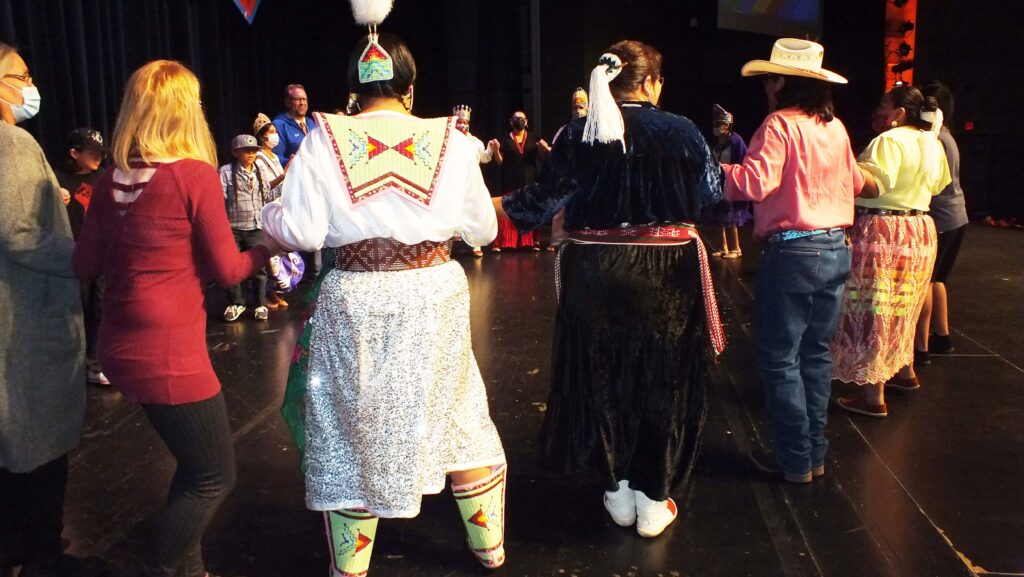 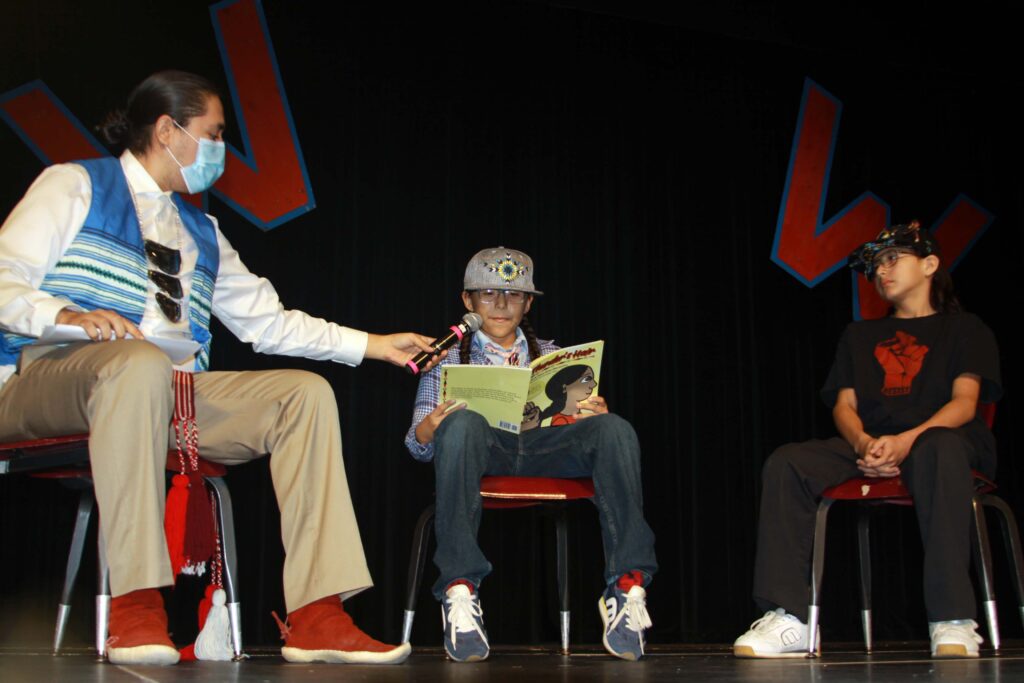 Finally, Thunder and his brother Tyler read us a story called “Thunder’s Hair.” 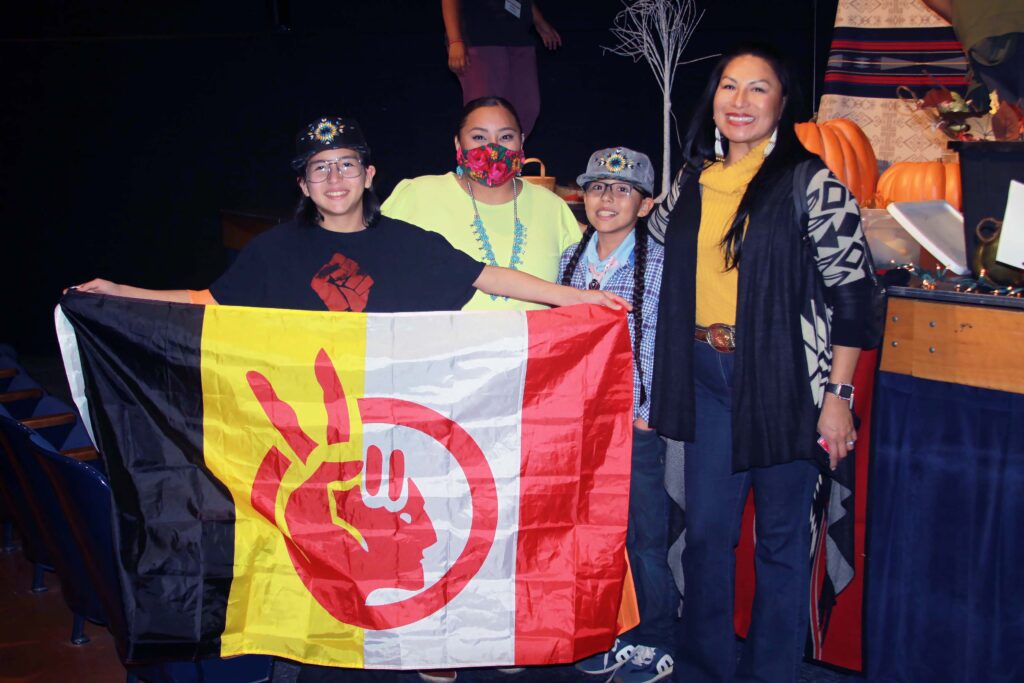 Here Tyler and Thunder are with team leader Tiffany (middle) and their mom (right). 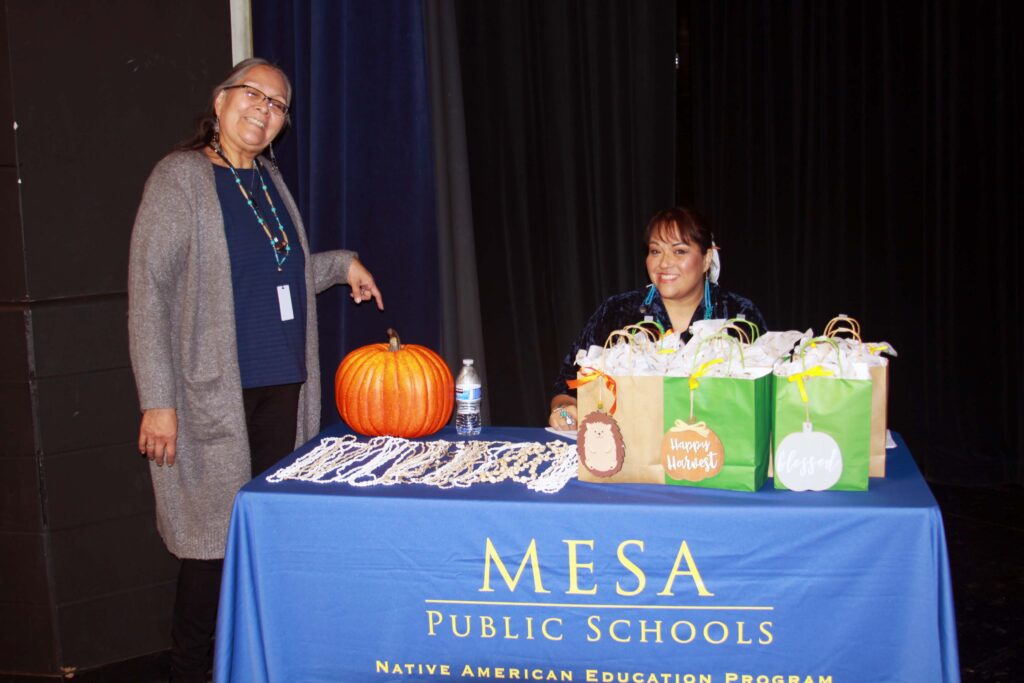 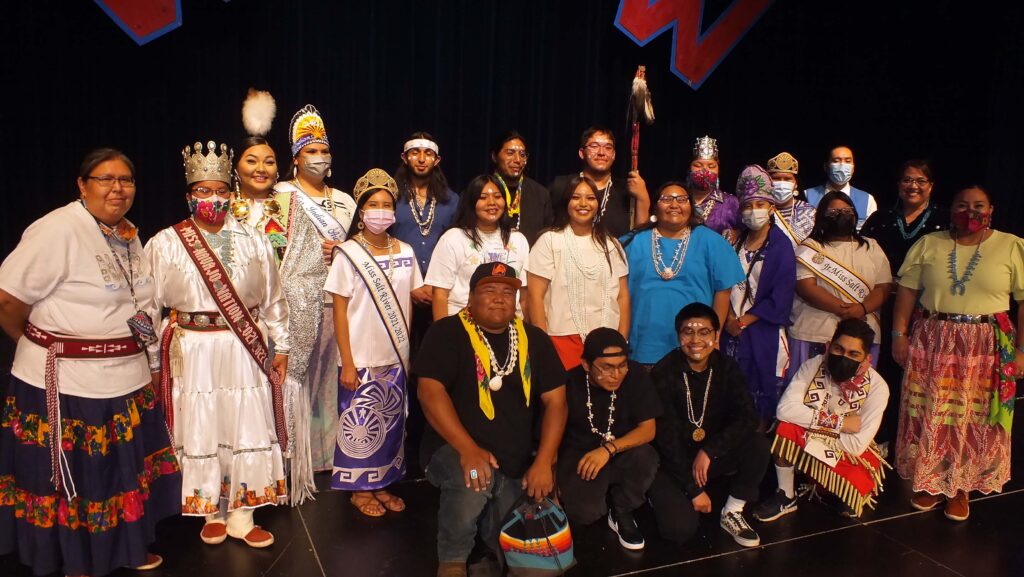 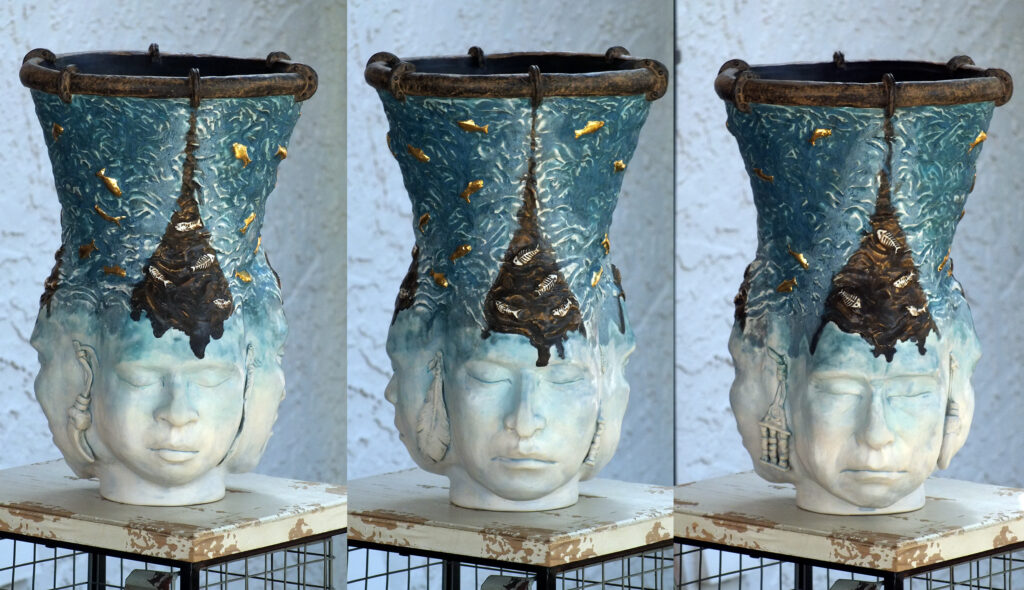 This can’t wait any longer. The Huntington Beach oil spill on October 4th, 2021, reminded me again. 25,000 gallons of crude oil flowed into the ocean. As the beach cleanup goes on, residents can apply for federal disaster loans. But why should the government (we) pay for the corporate oil exploitation sins? Make the oil barons cough up the money. Besides, no money can make the hazards of offshore drilling or pipelines breaks go away. 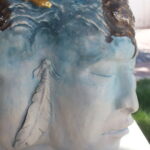 Look, at the above sculpture “Water Is Life (Remembering Standing Rock)”, a porcelain piece by Cincinnati artist Lisa Hueil Conner. It was featured in an SOS Art Exhibit and Retrospective last year. Isn’t it beautiful? I just had to have it. I look at it every day. It tells an important story. And it’s also a stark warning about oil spills.

There are oil spills all the time. Remember the Amoco Cadiz in 1978? The Exxon Valdez in 1989? The exploded and burning oil platform in the Gulf at BP’s Deep Water Horizon in 2010? This was the largest oil spill in history, which left 11 workers dead. 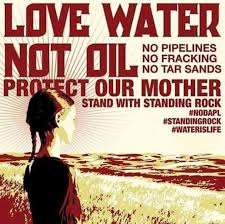 And the spills continue. There were at least 8 spills at the North Dakota Access Pipeline in 2017 after it was put in operation again. The Native American DAPL protesters (2014 to November 2016), who held watch over their land, were trying to stop the pipeline transgression, but the protectors of the land were forcibly removed.

At the time of the no-DAPL protests in 2016, I marched too, in Arizona. At our Native American program in the high school, we held a presentation on the DAPL issue with Native American speakers, Tim Hunts-in-Winter (Lakota, Standing Rock), Stephanie Big Crow (Oglala Lakota), and a key participant by the name of Rance. (The assistant principal wasn’t too happy about it.) 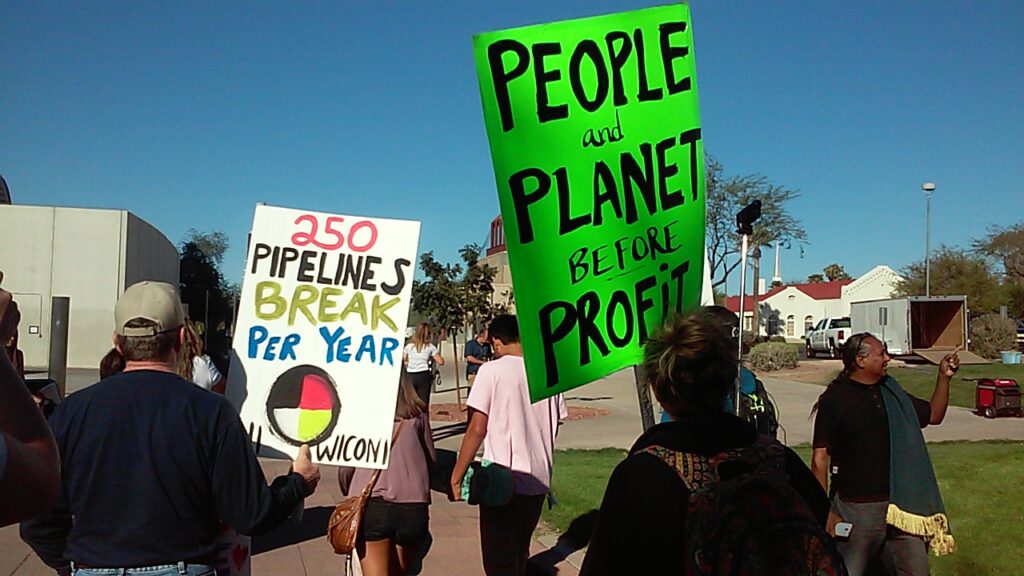 The Dakota (Sioux) knew they had reason to be afraid: The Black Snake prophesy could bring life to an end. In that prophesy, a black snake would slither across the land,  poisoning the water before destroying the Earth—the Dakota Access pipeline. It crosses over the Standing Rock Reservation and under the waters of the Missouri.

“There was a prophecy saying that there is a black snake above ground. And what do we see? We see black highways across the nation,” said Dave Archambault, chairman of the Standing Rock reservation, which straddles North and South Dakota. “There’s also a prophecy that when that black snake goes underground, it’s going to be devastating to the Earth.” (CBC News, December 11, 2016) 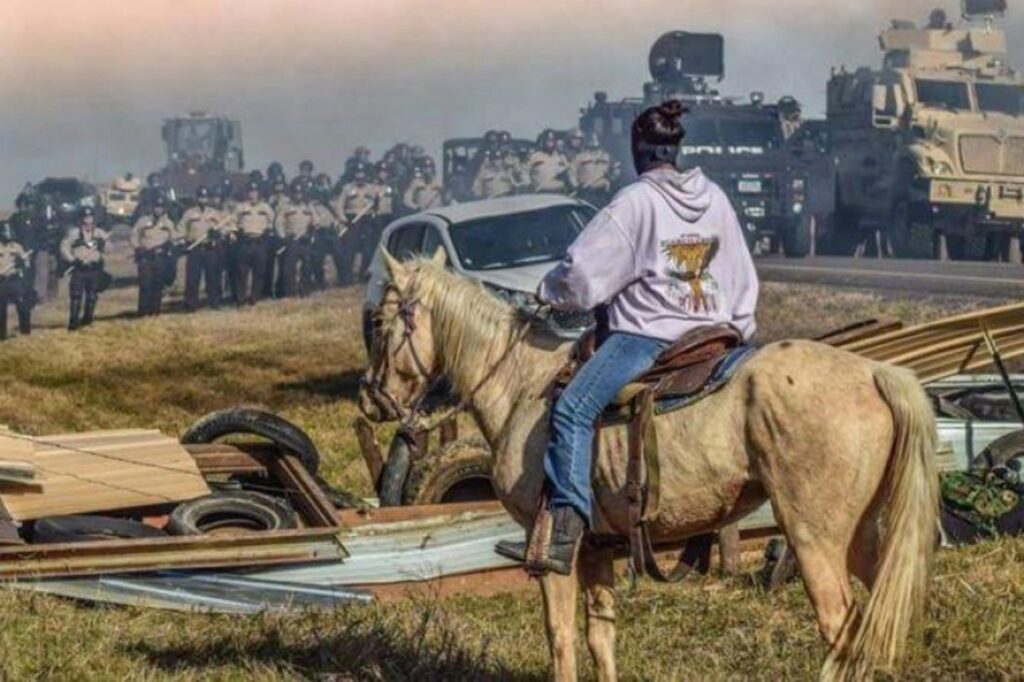 That’s why hundreds of people had gathered in 2016 to pray in camps along the Missouri River. The incoming Trump administration put a violent end to the encampments. 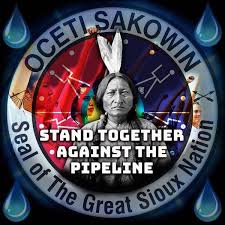 DAPL continued. The DAPL pipeline expansion is now vying to cross under the Missouri River without a federal permit. Standing Rock fears that their drinking water supply is threatened. They called on President Biden to shut down the pipeline.

“We still see the disregard for indigenous people’s humanity in the handling of the Standing Rock Pipeline in North Dakota and its ongoing controversy since 2014. Hiking trips to several national and state parks in the Dakotas inspired my work in porcelain called “Water is Life (Remembering Standing Rock)”. This piece is a visual statement of my outrage over the pipeline that was allowed to be built below Lake Oahe and through sacred native lands in North Dakota. The base of the piece depicts a Lakota family (a father, mother, and child) with representative Lakota icons displayed beside each face. The faces are a composite created after viewing many photographs of members of the Lakota tribe. The rim is the pipeline as it leaks toxins into the ground water of the Lakota peoples. Of course, the pipeline has leaked countless times into the lake water.”

What can I say? Protest, protest, protest! Speak up when things are wrong. Art can give you a voice for that. SOS Art Cincinnati has been going strong for 25 years, giving a diverse voice to many political concerns. There is a lot say about humanitarian outrage—rightfully so.

What can we do? We all use oil. We can car pool and use less of it. We can opt for alternative energies. We need to be willing to pay a higher price for clean products.

But what would we be without water? Lake Mead is at its lowest point in history.

Luckily we can always drive up to Horton Springs for some untreated well water right from the earth. Inder scooped it straight from the source; spring in the rocks to his right. (Yeah, yeah, wrong kind of bottle, I know!)

Bob Everhart has left the building. He passed away on August 20, 2021, at the age of 85 from heart complications. The world of Old-Time Country Music has lost its most passionate advocate. He was a great entertainer as well. Here we are with Bob and Sheila at LeMars in 2017. 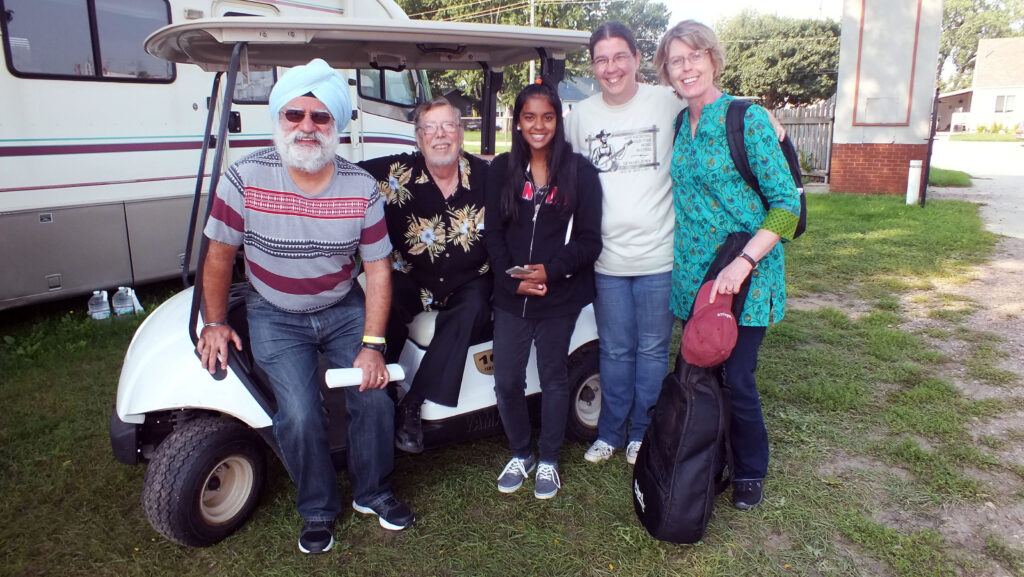 I met Bob on my first trip to the United States in 1979, visiting my hometown Friend Maria “Leni” Petersen in Omaha, Nebraska. She, an accomplished zither player and singer, took me to a county fair park called Westfair. 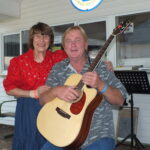 Maria “Leni” Petersen, plays the zither, her friend the guitar, the harmonica, and the saw.

Instantly, I was immersed in a world where folks strummed and fiddled and balladed on every corner of some dusty arenas or around the camp fires in the RV park. You could hear bluegrass, honky tonk, highway music or Appalachian dulcimers, a vast range of styles topped off by gospels and spirituals. This good-natured music mania was also going on simultaneously on several stages. There were competitions, instruments, vendors, foreign guests–I was hooked. In the eighties, I often ventured to Iowa over Labor Day weekend for a country music bath and to hear familiar acts again. 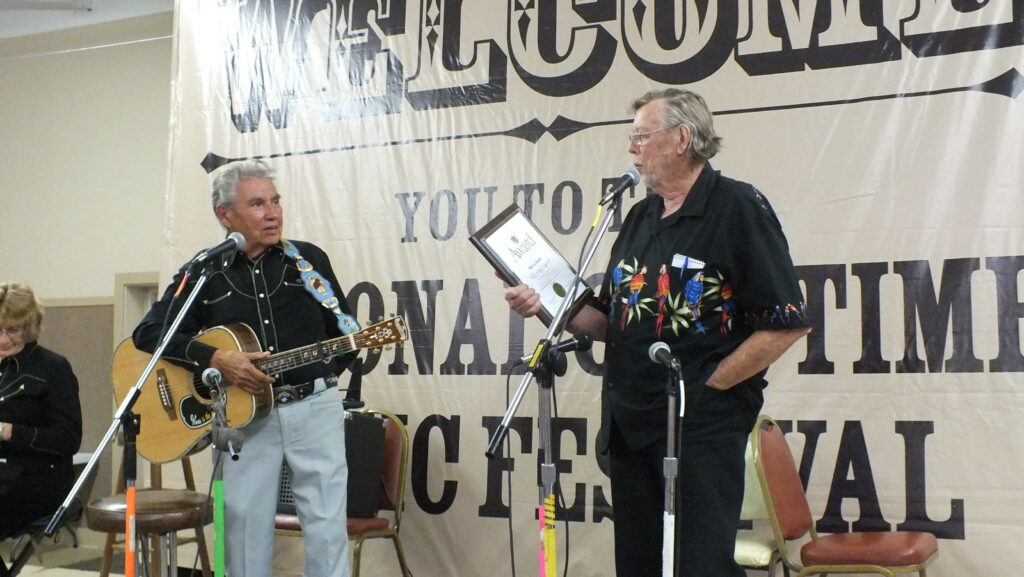 Bob is recognizing Harry Rusk, a First Nations minister and singer from Alberta, Canada, with a lifetime award.

Bob Everhart was the perfect host at his festival, scootering on a golf cart all over the park. He was also an accomplished singer of train songs, when he let his harmonica do the Train Whistle Blues, ALL Around the Water Tank, the City of New Orleans, or the Wabash Cannonball. And in the winter he usually went on tour to Europe, including Germany. When I still lived there, I booked a couple of gigs for him at the Oklahoma in Munich, the Notabene in Wolfratshausen, and even Gasthaus Lacherdinger in Ascholding. I will never forget that  raucous evening with the Black Bottom Skiffle group. That night I realized that I would never want to be a music event manager. How, dear Bob in heaven, could you do that tricky business for more than 40 years? God bless you! Please tell him/her to blow a bit of traditional country music our way, and not those terrible hurricanes! 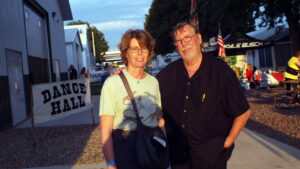 Nobody made a lot of money at Westfair, Avoca, or LeMars, but we all made lifetime friends. When I revisited Bob’s festival in 2015 and 2017, I recognized some familiar faces from the eighties, like Stanley “Gallon Hat” or Erv Pickhinke. Some I didn’t recognize because they weren’t born yet in the eighties. These young musicians were the maybe-soon-to-be-famous offspring of the CW hardliners. Bob cared a lot about growing up young country musicians. He was excited to provide them a platform to show their talents. Bob kept his Who’s Got Talent in Country Music going until his eighties. Well done! A life unmatched.

And so many of the young CW folks played him their last respects with songs like “In the Sweet By and By.” But here comes Jacob Austin as Dapper Dan.

Here is more In Loving Memory of Robert Phillip Everhart 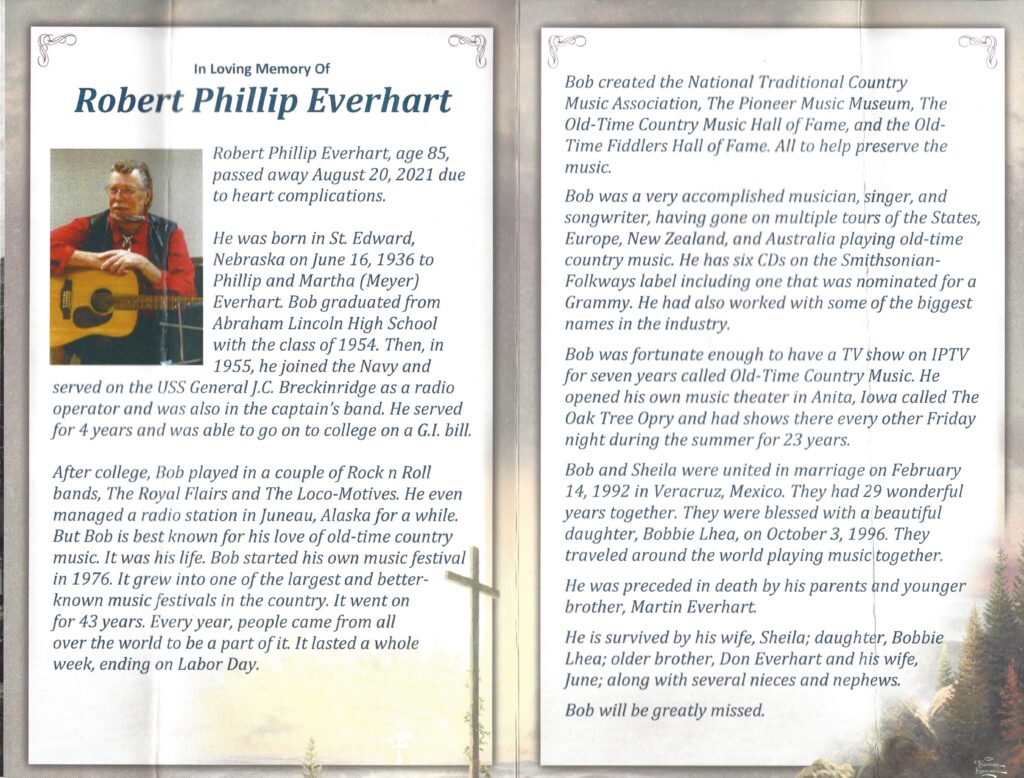