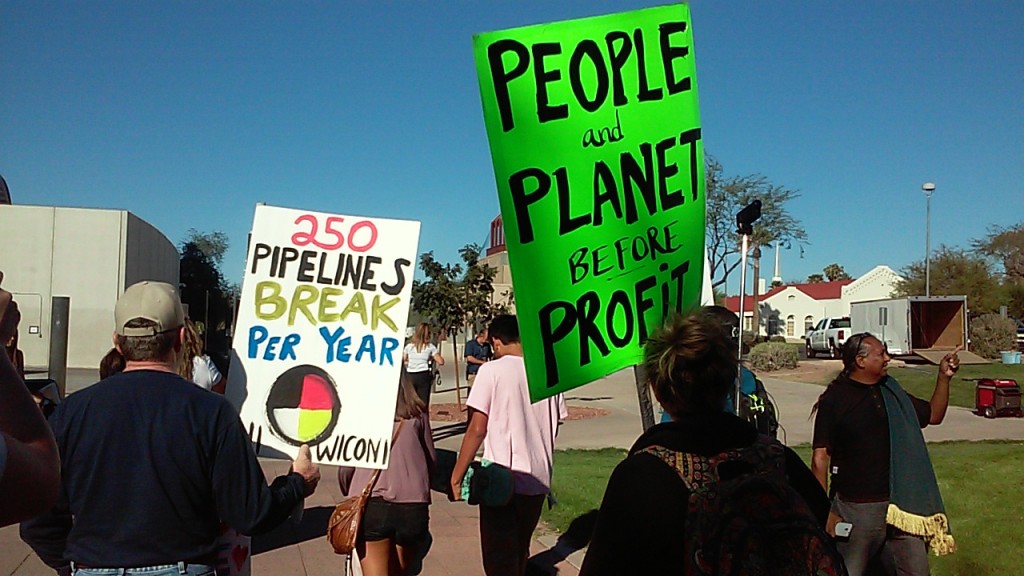 “Water Is Life” No debate about that. Thousands of people from all over the world gathered last fall 2016 at Standing Rock Reservation for a camp out. The Dakota tribe protested the pipeline because the DAPL violated tribal autonomy, desecrated cultural treasures and gravesite, and put the water resources–above all the Missouri River–in great jeopardy. To no avail. After a short-lived halt of construction by the American Corps of Engineers, the pipeline was finished by executive order and the protesters cleared away in January 2017. There are many stories of camp endurance, nonviolent resistance, and bravery in the harsh Dakota winter. Solidarity and support (such as donated wood-burning stoves from Germany) poured from all over the world.

Listen to this Native American speaker at a Phoenix solidarity protest march.

Nevertheless we humans keep building industrial conundrums. In the process we are soiling & spoiling our water resources. Industries sprout like there is no tomorrow. What kind of tomorrow will it be? The Dakota Access Pipeline is finished and open for business. Pipelines spill all the time. Only we don’t hear much about it, unless an offshore drill platform bursts into flames–mega disaster. Deep Water Horizon?

Here is a much better horizon: Nature listened to people at Standing Rock and sent its buffaloes.

People from all over the world joined the Dakota Nation for Thanksgiving 2016. Native Americans are the Greenpeace of our times. We all need clean water. The descendants of Sitting Bull and Red Cloud are still fighting the legal battle for sovereignty and the environment. Let’s stand with Standing Rock. The debate about water is here to stay.

This entry was posted in America, life, nature, survival & ecology. Bookmark the permalink.