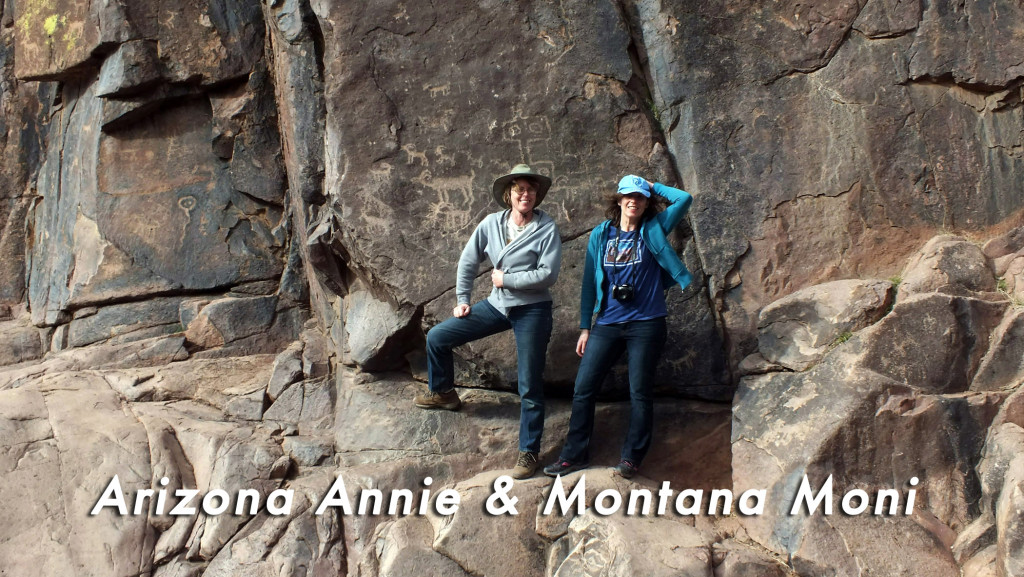 NOTE: No disrespect intended towards cultures ancient or new, but rock art makes my imagination fly. 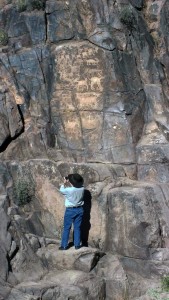 When you hike out here in the scenic Sonoran Desert and farther beyond towards New Mexico, you may stumble upon traces of ancient art. On slabs of rock, protected overhangs, or inhabitable caves, humans of times long gone have immortalized themselves on petroglyphs: ancient “graffiti” of the Southwest?

When I come across such rock art, I can’t help but wonder. What were the people of old thinking? Anasazi, Hohokam, and their descendants have depicted wildlife such as stags, turtles, snakes, and birds in prominent places. Mixed in are symbols, concentric circles or spirals, arrows, jagged lines like lightning, and interesting geometric patterns. Of course the human figure always plays an important role too. We can guess from the figure’s attributes what their rank and role may have been. Only guess we can. 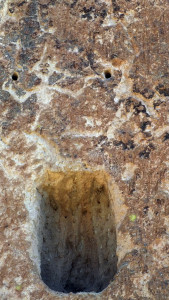 I have always been fascinated by petroglyphs. When I look at these sketchy and attractive ideas on the rock in front of me, my mind goes on a time travel. When I look at them long enough, I feel a presence. Or more present about myself?

Many anthropologists have studied petroglyphs for their significance. Life-style, rituals, worries, and worship might be deduced from such stick-figure-like images. It must have been quite cumbersome to chip the images out of the granite; limestone seemed an easier medium for carving. No matter what rock, I conclude that the ancient artists were persistent and their pictures were important to them. It also seems that I can sense the ambition for skilled expression to make the image just “right.” 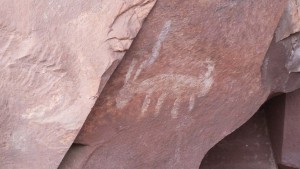 That makes me wonder even more. Did the ancient ones have “professional” petroglyph makers, specialist who made art for money? Was “petroglyphing” a rogue craft or an underground culture? Were some images chiseled for magic purposes to ward off evil spirits, make the crops grow, or smash the enemy? Was this a calendar documentary to leave a legacy, the history of the tribe? Maybe. How can we know? And then a crazy thought strikes again: What if the ancient ones were just having fun? (Or the elders might sent the troubled individuals for some rock art therapy. Or told the kids, now go get busy, chip some rocks, and draw me a picture.) 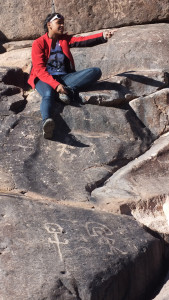 Some very strong images have conquered merchandising and government. The Kokopelli flutist, a fertility and growth symbol, has become a mainstream icon. The sun symbol is gracefully adorning the heart of the New Mexico flag. So there must have been some lasting value to these plain engravings. Petroglyph art feels alive and buzzing today. Many hikers such as I go out looking for them to get lucky once in a while.

Our closest petroglyphs are just 30 minutes away in Gold Canyon at the end of the Hieroglyphic Canyon Trail (1 hour hike). Where the trail peters out, we stop in the canyon by the gulch for a rest. It’s such a scenic place, with a view all the way to Phoenix. On the sunny side of the canyon, we marvel at a tapestry of petroglyphs all the way up the rock wall. How did they get so high up there? This idyllic  place, the end of the road (?) or a dating cove (?), must have been enjoyed by native people hundreds of years ago just as much. 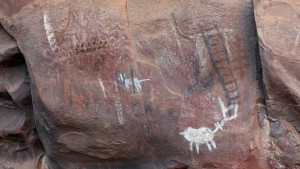 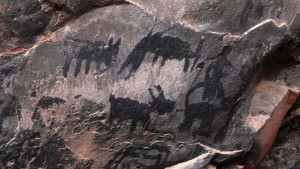 Another time we toured the Palatki Heritage Site nearby Sedona. This protected cove nestled into an overhang of the Mogollon Rim (mud-brick cliff dwellings nearby) shows many-layered styles of petroglyphs, some perhaps 2000 years old, others superimposed by modern vandals. Defacing ancient art is obviously a despicable act; however, you might see it also as a “response” and “dialog” with artists across ages. Think ahead 1000 years; today’s senseless scribbles might become of interest to future researches. (Right now, they are deplorable.) At Palatki you can see “black” petroglyphs located above a popular fire place. The smoke of ages has adhered to the pictographs, since the rock surface was eagerly absorbing the sooth on the roughened up surface. 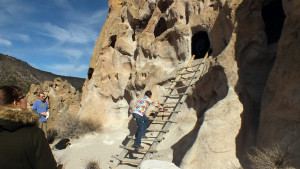 Bandelier Monument in New Mexico near Los Alamos is a fascinating site of ancient pueblo/cliff dwellings and petroglyphs. The site was already abandoned when Spanish/European settlement arrived. 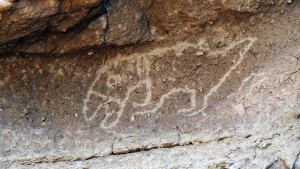 What you can witness there are the remainders of an elaborate architecture and society including plenty of pictographs. A ranger pointed out the drawing of a macaw high in the cliffs. It is assumed that these birds were traded live from Central America. As we modern people try to piece together ancient cultures, we repeatedly discover that these societies were far from “primitive.” So, go see some rock art real soon. It will make you wonder, I hope.

You may want to start your tour with famous petroglyphs “by the roadside” in Albuquerque, Petroglyph National Monument, more Information here.

This entry was posted in Arizona, art, travel & tourism and tagged petroglyphs. Bookmark the permalink.

One Response to Petroglyphs: Ancient Graffiti of the Grand Southwest