Teatime in India has its special ceremonies. Spiced tea, “chai,” is boiled, not brewed. Every family infuses its favorite aromas and has a protocol for making it. 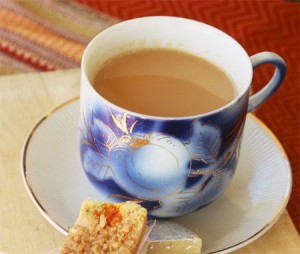 My favorite cup of chai with milk cake

Chai has sometimes brought me back from the dead. No matter how tired I was from jetlag, this hot cup of brew revitalized me every time.

Chai time on the Indian continent is a time for bonding and celebration. Three Cups of Tea is the title of a book by Greg Mortenson about building schools in rural Afghanistan. Tea, in the predominantly illiterate society, had contractual power.

In the British movie comedy, East Is East, with Om Puri as strict Pakistani patriarch, tea plays an important role during marriage negotiations and fish & chip store breaks. The head of the family likes to show moderation by asking for “half a cup.” 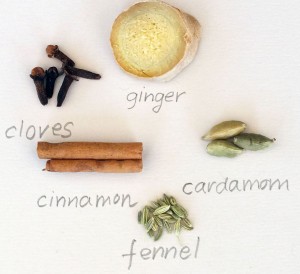 My favorite spices in the chai

An Indian joke goes that if the lady of the house offers you “another cup of tea”, it is time to leave the party. However, hospitality usually overrules the ticking of the clock. So you might as well accept.

If somebody in India offers to make tea for you, their special kind, they want to spend time with you. Their cup of tea shows that they love you very much. So just sit back and enjoy.

For the longest time, I did not make chai. Why not? Simple. I wanted people to shower affection on me by making me a cup of love. But I also feared I’d make mistakes. Now since I learnt how, let me share some love with you. 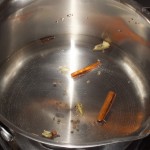 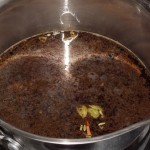 then the tea leaves 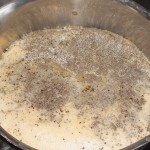 Now the tea is ready to pour into cups. Use a sieve to keep out the sediment. It is best to use a sauce pan with a beaker to avoid a mess.

Serve the tea with cookies, burfi, or chickpea snacks. Ready for a (re)treat? Take a chai time break! It is invigorating. Enjoy your tea time!