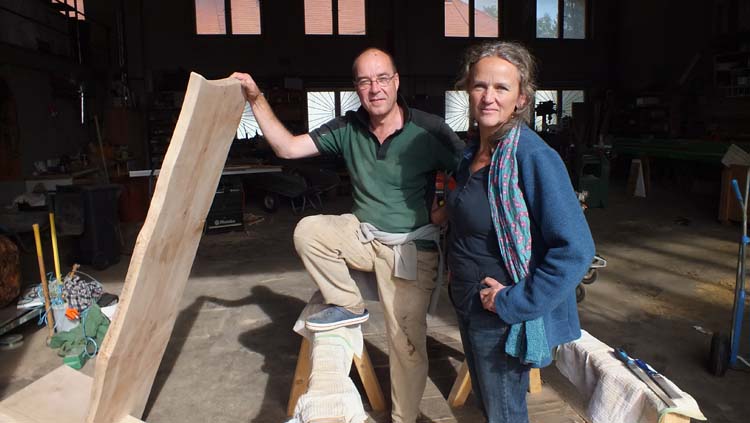 Andreas Kauer (E-Mail) giving a tour of his woodworking shop to my friend Maria.

Sound soothes, sound heals—sounds good to me. Music always chases away my bad thoughts. It gets me into the swing of writing. Mellow music, especially guitars, brings out the best of my ideas.

We all know about Tibetan singing bowls, right? My daughter bought one in Sedona. But sound chairs and sound beds were new to me. I had never done any music therapy. What is it all about, I asked Andreas the Eibenklangzauberer from my home town Ascholding. He calls himself the “Yew Sound Wizard” for deep reasons. “Just try it,” he said.

I sat for 20 minutes on the sound chair made from curly maple. I let the continuous harmonics that Andreas played on the strings of the backrest wash all over me. It was so relaxing, sitting down, letting go—beautiful, easy, flying like a baby to be born.

I am not a candidate for yoga or meditation, too high strung. Yet these harmonics induced their magic on me. I eloped from my daily confines and my inner dictator. Yeah, now I am in love with these musical chairs for healing.

“On its back the sound chair has 32 steel strings but only two different notes”, Andreas explained. He built one of his two sound chairs himself. His favorite therapy instrument is made of yew wood. 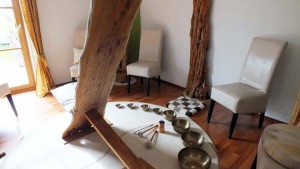 “The yew is the most important wood for me”, Andreas said. “It is among the oldest trees and has the calmest radiance.” As this rare wood is strictly prohibited from commercial use in Germany, he had the rawlings brought over from Ireland.

“I have furnished my therapy room entirely with sculptures and therapeutic instruments made from yew wood”, Andreas said. The yew artifacts create an inspirational atmosphere. Mind you, every part of the tree except for the berries is highly poisonous. But the energy is very positive.

And the poison is good in just the right dosage. Extracts from the yew’s needles—the tree resembles a scraggly stunted spruce—contain the chemical taxol. Known for its healing properties since ancient times, the yew is now being formally investigated as a cancer cure. Yew trees are rare and grow very slowly. They had become almost extinct in Europe in the Middle Ages because they were the best material for longbows. 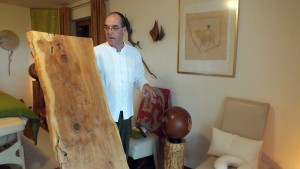 “When I had reached the bottoms, living out of my car like a migrant, the yew trees talked to me,” the healer said. Several years ago, the formerly successful businessman had crashed from overwork and burnout. During his recovery he studied up on the energies of different woods. The yew tree spoke to him, like it did to the ancient druids. He sensed the energy transpiring from an eternal source. 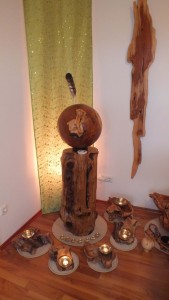 Andreas’ clients have had amazing experiences on the sound chair. One man with a pinched nerve tossed away his cane after the session. Not every transformation is this drastic, but everybody feels better after the sound massage.

“It is my dream to build a sound bed from yew wood for cancer patients,” Andreas said with his calm and soothing voice. “I strongly believe the spirit of the yew can attune the cellular level. There is another hope for cancer patients.”

When Andreas makes his wood sculptures, he removes the decayed matter and sets the innate beauty free. He sands the wood ultra-fine and polishes the orbs and other pieces scrupulously with natural oils. He wants the therapy tools to be comforting to the touch. And here are some of Andreas’ fabulous sculptures: 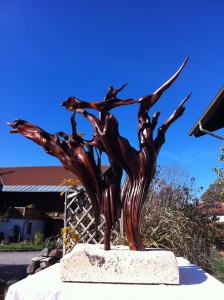 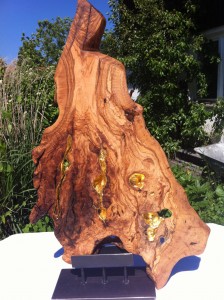 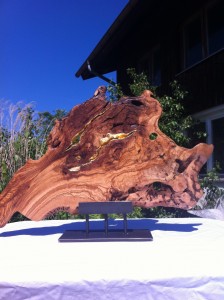