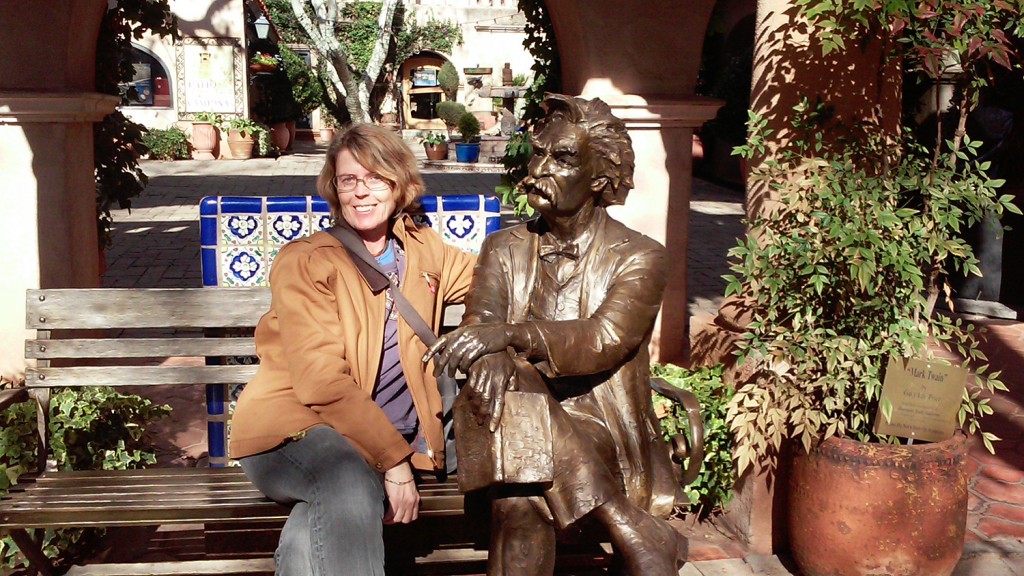 Mark Twain is my American literary hero. Recently, I had a chance to take a picture with my idol at Tlaquepaque in Sedona. Wow! Our chat felt nice.

Mark Twain, aka Samuel Clemens, was a journalist before he was a novelist. He started to craft stories as young as 12 years old. He ceaselessly honed his art as a newspaper reporter, first in St. Louis, MO, and then many other places. Twain found just the right words, perspective, and dosage of humor that he was able to “get away with murder.” Lesser scribes would have been hung.

I believe in Twain. A master of social criticism and satire, he pointed out hypocrisy, absurdity, and profound human misery. Imagine, a seasoned alley cat like Huck Finn coming to his own conclusions about the runaway slave, Jim. These unlikely companions float down the Mississippi on a raft with plenty of time to learn from each other. Use your brain, man! So Huck did. In his own way, Huck Finn was a humanitarian of the simplest kind. Kind.

Another character I admire is the dude in the Connecticut Yankee at King Arthur’s Court. That’s a story of brain power gone awry. The Yankee’s square-headed mentality and modern weaponry caused total destruction in the chivalrous, medieval world. In a doomsday scenario, royal jousting spiraled fully out of control.

Twain was a master of religious satire and got away with it as well. Captain Stormfield’s Visit to Heaven tells a story of how the afterlife turns out much differently than expected for the main character.

One of our greatest problems is, which Twain often indicated, that we people like to overrate our own importance. “All you need in this life is ignorance and confidence, then success is sure.” Dang it! We see that all the time.

I learned a lot of good words from Mark Twain as well and added them to my American street vocabulary. Although by now antiquated, I still thoroughly enjoy expressions like “low life, bottom feeder, scallywag, carpet bagger” and many more. We might use other words today but the same character types are still lurking around each corner.

Finally, Mark Twain’s excursions into the German language are hilarious. How can the prefix from a verb break off and resurface at the very far tail end of a sentence? And he sure admired the German knack for assembling some of the longest composite nouns in the universe, such as “Donaudampfschifffahrtskapitänsmützenabzeichen” (Danube Steam Shipping Company medal for the captain’s hat).

And if Twain were still alive, he might play even mightier tricks with words. Especially now that we have entered the age of alternative truths and official lies are not even concealed any more.

Language has always been a creative process. It has to, because the world keeps changing all the time. If Latin were still a living language, someone would have made up new words for “aircraft carrier” or “underwater mortgage” or “fragile facts”. Or borrowed them from another language?

Let’s face it. Since the last elections, our vocabulary will soon add some new inflexions: That’s so trumpish! What the trump just happened? Don’t trump me! Let’s join the Trumpler Club. (Not me. I am not a Trumpionista.) Atta trump!

Oh, trump! Where will this end? Let’s read those Mark Twain stories again.

This entry was posted in America, social interest, writing. Bookmark the permalink.