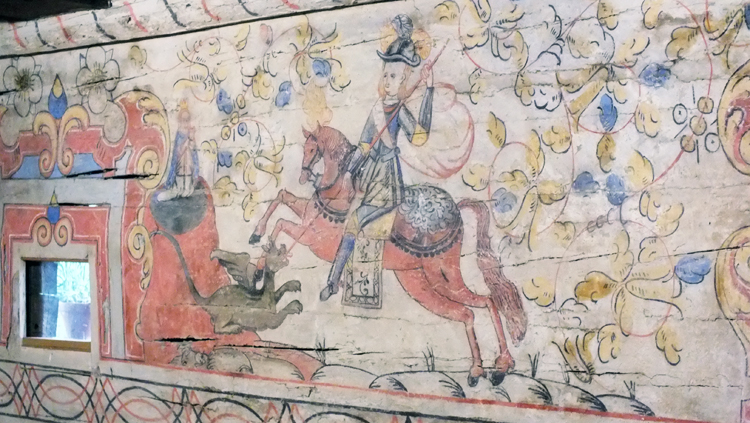 This St. George is depicted in a very, very old house at the living history museum Glentleitn near Kochel am See.

I never knew that my friend Schorschi (Georg) Unterholzner was so much into saints. He usually writes Bavarian murder mysteries. In his latest publication, a pretty coffee table book “Faszinierendes Tölzer Land”, he came up with a story about a local St. George in the Bad Tölz Region. It may be a wayward myth that St. George was made into a dragon slayer, he argued. Because the name itself comes from the Greek organon, which means worker of the land. However, even land workers have turned their plough shares into swords. I believe that St. George became a warrior, because he had to defend his values. So let me have the joy to introduce to you St. George the Dragon Slayer. This fearless down-to-earth man is a saint for everyone, from Ireland to Asia Minor. Much more accessible than lofty St. Mike and hardly as nationalistic as Siegfried. Here is what I could gather about this soldierly landman and the dragons he might soon fight. 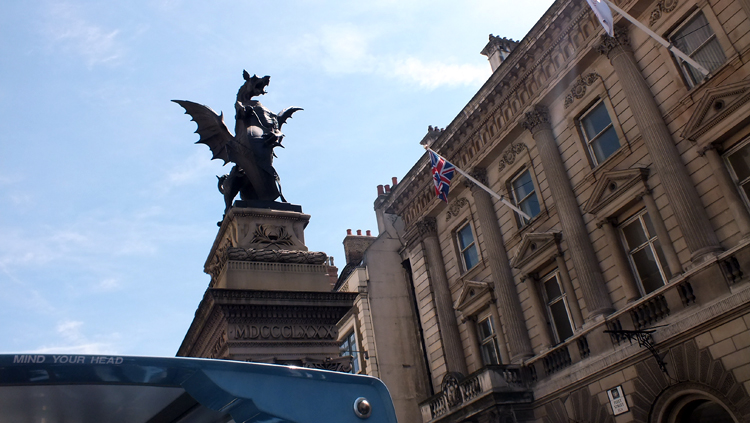 Last time I checked on the dragons (above a London creature) they were still alive and well. When you travel England or Bavaria, you may spot some dragon tails. I have grown 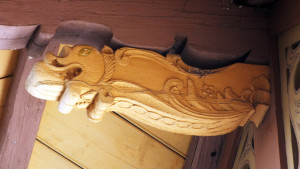 up with a dragon under one roof in my childhood home in Bavaria. It stuck its fierce head out from under the gables. This early image inspired me to write my adventure novel “Der Keltenschimmel” (The Celtic Stallion). I learned that the dragonhead was a charm against a fire catastrophe. A fire-spitter as protector. Makes all the sense in the world? Anyhow, dragons, St. George, and Celtic myths inspired my young protagonist, the hot-headed apprentice writer Katrina. 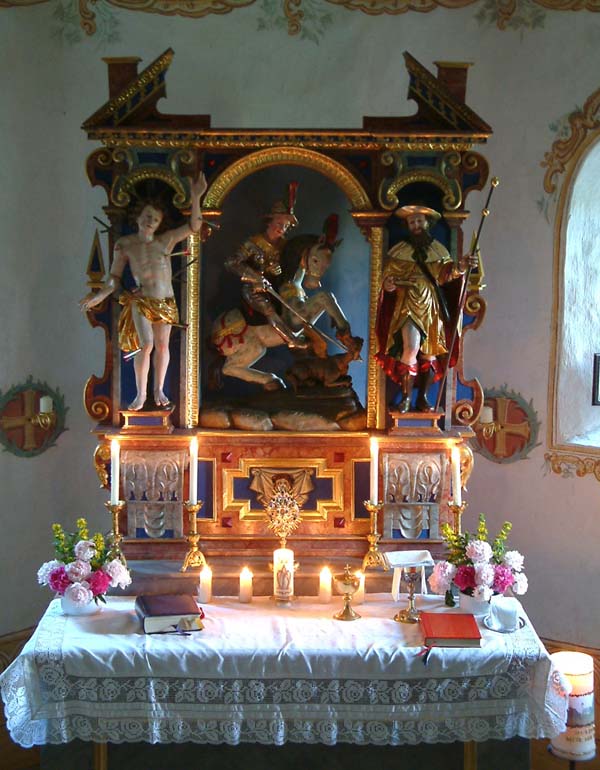 In Bavaria, dragons are lurking around every corner. The soldier’s memorial in my village is protected by St. George the Dragon Slayer and Patron of Soldiers. St. George is also the celebrity of the little village chapel (Schimmelkapelle), which is said to be built on a Celtic sacrificial site. Of course that chapel inspired all the imagination for my Keltenschimmel. It used to contain many dozens of pious votive paintings for a cure from illness or safe return from war. St. George (altar) is riding a white horse (Schimmel). Aside from the holy tangents, a ghost horse has been seen cantering around the little church and a witch livesnearby. DRAGON SLIDE SHOW 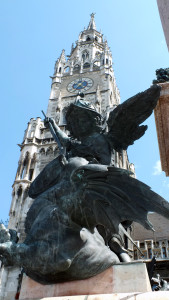 Let’s go to Munich’s Marienplatz with its neo-gothic city hall and Glockenspiel. St. Mary rules the heart of town there from her mighty column. Four little angel mercenaries at her feet fight off fierce mythological creatures. But one nifty reptile escaped the heavenly authorities. This sinister reptile is now crawling up the west corner of the Rathaus. It has always fascinated me. 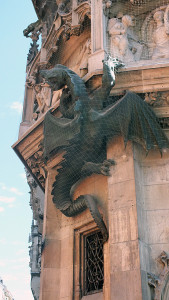 Dragons rule London too! It seemed that St. George forgot to kill a few. In front of Westminster Cathedral, St. George dominates the scene, as he is also a part of the royal coat of arms at nearby Buckingham palace. But in other places dragons proudly fly about town. A dragon aggressively standing on its hind legs guards the bridge to the free City of London. Another flying reptile roams the air space around St. Paul’s. 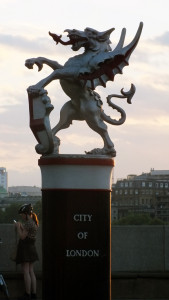 The similarities between the British and Bavarian gothic do not end here. At the Liberty, I saw a Glockenspiel with St. George chasing after the dragon. No dragon at the Rathaus Glockenspiel in Munich, but a medieval court scene and joust. The dance of the coopers’ guild symbolizes the perseverance during times of the plague.

I have grown up with dragons nearby, such as the one under the roof of our 200-year-old Bavarian farmhouse. I was surprised that dragons were this popular in England too. The Queen’s Knights of the Garter and the Bavarian Knights of St. George share an important saint. And their dragons too. 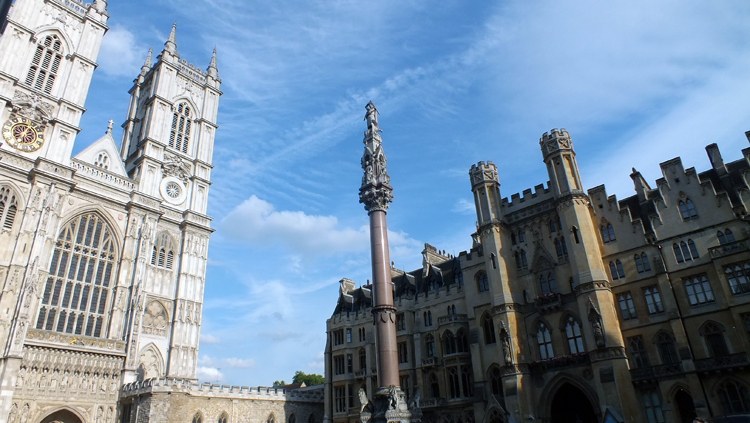 This entry was posted in Germany, travel & tourism, writing and tagged myths. Bookmark the permalink.