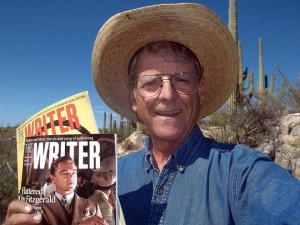 I met Dan about seven years ago “on the job” for our local Up Close neighborhood newspaper. Dan had just co-authored and published a very interesting book FIND ME in collaboration with retired police officer Kelly Snyder. In Find Me, you have missing and—most likely dead—people being “read” through an international team of psychic investigators.

Bodies were located and cases solved with the help of these rather unconventional investigative methods. Dan’s psychic specialty is map dousing. He asks the universe “yes-or-no” questions while dangling a pendulum over a map. But he also helps search-and-rescue-teams canvas rough terrain with a passion. Dan Baldwin: ghostwriter, adventurer, and medium. 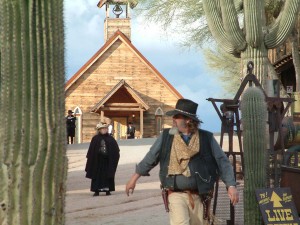 Find Me wasn’t Dan’s first book. But it was probably the first one published with his name on the cover. Dan is a ghostwriter of about 50 titles with other people’s name on them. “As long as they write my name on the check, I am all fine with it,” he jokes in his trademark wry humor.

Since those seven years ago, Dan has published 3 Westerns (CALDERA, CALDERA, A MAN ON FIRE, TRAPP CANYON), 2 murder mysteries (DESECRATION, HERESY), a novel (Sparky and the King), and a movie script in addition to his work for hire. Speaking about prolific, Dan can shake out a good story in about an hour. And he still takes the time to tutor novices like me whose books take on average 10 years.

Once in a while, Dan disappears into the Superstitions wilderness or other epic landscape. He gets ideas out in the desert, where he explores collapsed gold mines, follows the Apaches’ trails, or chances on potsherds and tragic wagon ruts.

And then he writes a book again. Some settings are brawly, ribald Western towns, other scenarios may chase across an archeologist’s field of dreams. And all these colorful worlds are quite tangible and informed, like a painted movie backdrop. Now, I am having trouble with some of Dan’s characters. There are a few awfully evil types, outright vicious villains in his books. Not the typical manslaughter cases but totally rotten demises. I can’t believe that Dan wrote them. He is the nicest guy. 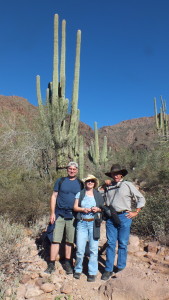 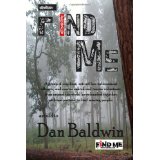 “I wrote one of the bad guys that had it coming after my dentist,” Dan jokes. He delighted in the virtual payback opportunity, and the dentist didn’t mind. It seems? Wait, maybe Dan will find out at the next sacamuelas appointment.

Dan likes to cultivate a solid “bad boy, best friend” reputation. He does have quite a few friends, one of them Harvey, and—no—he is not imaginary. Many in his writers circles, I guess, like Java mornings, plain, black, and strong.

One day, a bunch of us (Georg, my German mystery writer friend, his wife Angelika, and I) went hiking with Dan. He wore his impressive buck-skinner knife on the belt just in case a bear might show. Of course we felt fully protected, or were we? 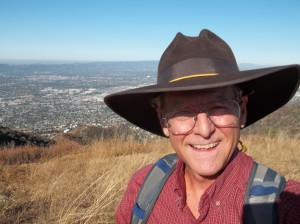 As the case may be, Dan has been a good sport on a couple of joint projects. A couple of times, he and I had a guest appearance in an elementary school, showing the kids the real world ropes of riding, oops, writing. Just one word after another, but with outline please. And make a good lead sentence to set the tone for the story.

The kids were mightily impressed with Dan’s hat and library full of self-written books. I taught them a bit of journalism. Together we made an excellent desperado author pair. Only that he spoke the more popular language. Although, can he write in German too? I don’t think so, Danny Boy. 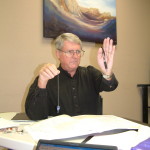 Now what other claims to fame must be mentioned? Dan has a website, writes a blog, and is a board member of the Society of Southwestern Authors. And as we speak he might be churning out another braggardy lawyer profile for a trade journal or indulge in a Playboy bunny’s memories. There is no telling with what Dan will do next. Oh, suspense! 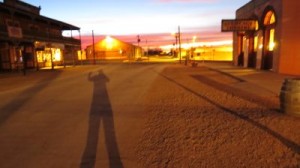 This entry was posted in Arizona, writing and tagged mysteries. Bookmark the permalink.

One Response to Dan Baldwin: Ghostwriter, Adventurer, and Medium