Things can change, right? After about ten years of trying all the wrong things, I might have won a decisive battle against Bermuda grass. This is what my backyard corner looks like now: 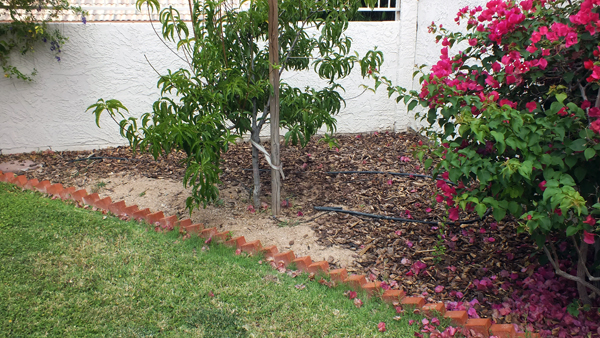 Finally, this desperate corner has been freed of the Bermuda curse

DO YOU SEE THE GRASS IN THE WOOD CHIPS? NO? GOOD! It’s gone for now. I asked my exterminator guy. He had the answer: Glyphosate. It worked.

THIS IS WHAT BERMUDA GRASS CAN DO: 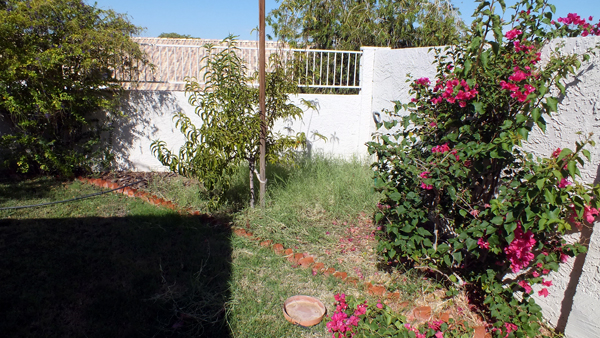 IN AN EARLIER BLOG, I WROTE: This is my story of a vengeance against grass. No, I don’t mean “weed”. I am talking about the very original Bermuda grass. 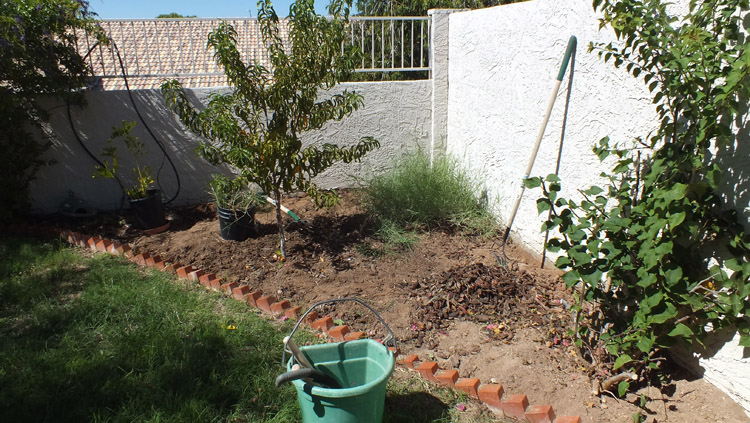 That’s what left of the Bermuda in the last corner

When we bought our house ten years ago in northeast Mesa, the whole terrain was overgrown with Bermuda, including the 50 rose bushes. We had no irrigation then, because our predecessor watered the lawn by hand. Needless to say, we had better things to do than standing around in the sun all day. 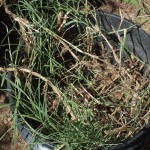 In Arizona it is not cool to have grass, at least not a lot of it, because it uses up too much water. Arizonans have Xeriscape, desert plants, rock gardens, and at most a little drip irrigation. The city even pays homeowners to abolish grass.

Anyhow, having been raised on a farm, I wanted to keep a little green. So we had irrigation put in, but I also decided to convert half of our yard into rock-scape. That’s how my nine-year nemesis with Bermuda grass began. It takes an old-fashioned Catholic to deal with Bermuda grass from hell. The battle is not over yet.

How had Bermuda come by its name? Its roots reach as deep as the Bermuda triangle, at least that was my theory. Bermuda hairline roots are about 12 inches long. The mean thing are its fat tubers that go haywire in the dirt. It also sprouts long offshoots on the surface that intermittently take root again. 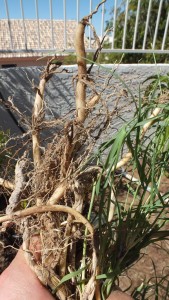 All these bad attitudes make for a hellish combat. OK, so I took to the spade, shaking the good dirt from a bad ball of Bermuda. This labor was much easier after the ground had softened from the rain. Where the Bermuda was ingrown with tree roots, the fight became especially tedious. While irrigating the volatile spot, I stirred, grabbed, pulled, twisted, whisked, probed, felt the devious grass roots. Sometimes I had unearthed half of the tree’s rootball before giving up.

I bent shovels and broke forks. And, darn it, after an area was dug up, the remaining Bermuda roots thrived even better. It took several tilling repeats for an area to be cleared well enough so that it could be finished with gravel.

Herbizides did nothing to Bermuda. Although the grass visibly turned brown, the roots happily continued to thrive. For a while I used a Bermuda root killer, but it soon was removed from the market by environmental control. By then, fortunately, I had converted the whole south side into landscaping rock, used some three tons to cover it.

I kept digging and developed myself a Bermuda hunting sense. I can distinguish its roots and feel the best way in the dirt to completely extract it. Bermuda gets bunched up at landscaping borders. So I dig especially deep there. I make absolutely sure that the borders of our lawn are trimmed down to the dirt so that no shoot crosses the line.
Regardless, some of the Bermuda always gets away. Twice a year I have to dig up certain spots in the rose beds. That’s OK. 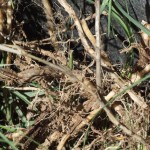 There is one corner in our yard, however, that I haven’t been able to tame in nine years. We had a Chinese elm tree there, which went rampant too. Although we removed that tree long ago, we are still fighting its roots. Now imagine crazy tree roots mixing with the Bermuda—an unconquerable situation.

I have dug up the last Bermuda triangle perhaps three times this year. Left it alone too long over the summer, it all went haywire. Even my yard helpers toiled to no avail. At the moment this corner looks like clean dirt. Woe to the Bermuda if it sticks its ugly head out again!