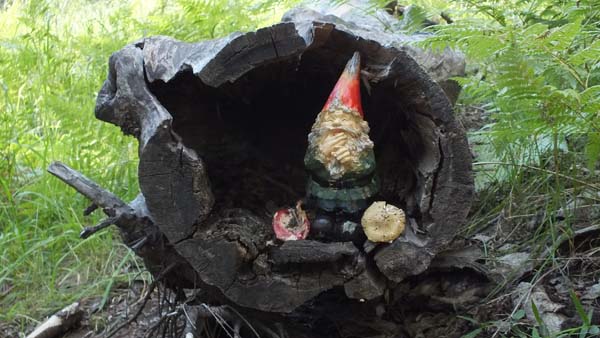 So there is no global warming? Huh? Phoenix broke its all time record high this August. The airport thermometer registered 117 F (47 C). Even our conservative, local TV station believes it now. Global warming is here to stay.

But who is to blame? I have heard good people talk a lot of nonsense, such as, “global warming is an invention of the liberals,” or “yeah, the weather is usually getting warmer between two ice ages,” or “aren’t you always looking for a problem?” Meanwhile the permafrost is melting to release its mammoth ivory. We all (and our cars and consumption) are to blame.

Don’t look into the distance. Just cross your doorstep. We in Arizona are 43 Celsius hot on average in August. The poor gnome (above) from the Snow Bowl on Mt. Humphreys worries about the safety of his home. Something is burning in California all the time. Sunset Point on highway 17 closed its restrooms for the lack of water. Darn it!

Global warming is also staring me in the face in Germany. It’s heavy too. When I helped stack the yard-long logs at my old home, nobody denied it: tornadoes are not normal for Germany. They should stay with the Wicked Witch in Kansas or Oklahoma. No, I don’t wish a tornado on anyone. But twisters in Germany are hopefully not the new normal. 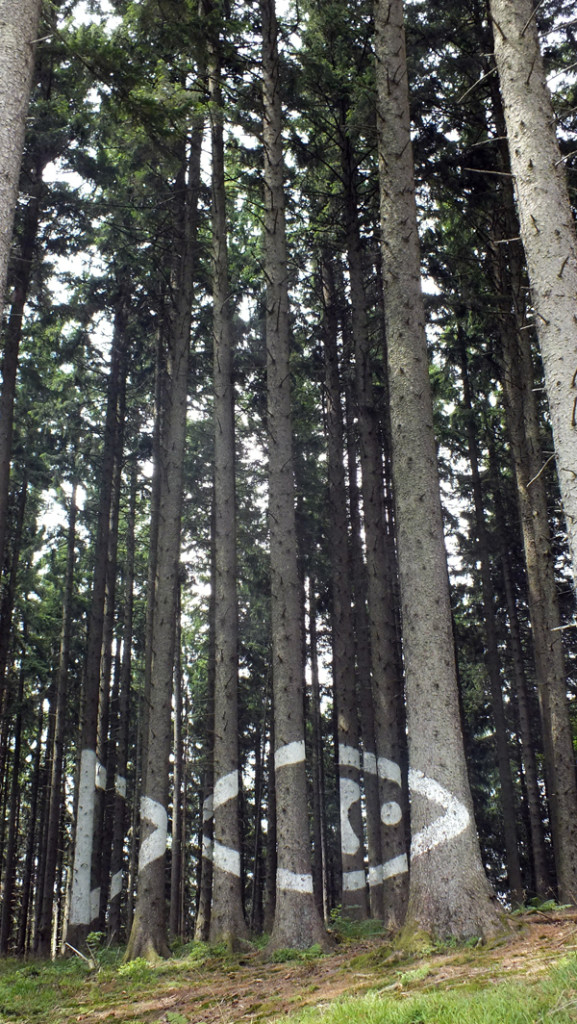 The result of Bavarian tornadoes: Wood here, wood there, wood everywhere. My brother’s farm has become a fortress of wooden castle walls. He and his village neighbors don’t know what to do with that much fuel. It will last them perhaps ten years.

Those desperate showers of wood are the consequence of a spring 2015 tornado. It wasn’t convenient that the storm happened right before the hay harvest. It was rather tragic too. Several people, including a young mother of two, died in the tornado. One tree trapped her way, the next one fell on top of her car. That woman was innocent.

But, then, all of us is are innocent. Or are we? We drive cars too often. We use too much energy. Which Newton law is it?

Newton’s Law of the conservation of energy states that “Energy can neither be created nor destroyed, it simply changes from one form to another”

Energy is contained in fossil fuels, but once you release the heat (and exhaust) from the gasoline, it stays around. Energy can’t go away or escape into deep space. It just shifts into different forms. Some of these forms are noxious to life on the planet. The face of the earth has been changed through our exploitations and material consumption. Ditto, the exhaust and motion energy from a machine (car) are here to stay forever. As well as the coolness of the refrigerator, if you keep the door open too long. However it would be a paradoxical exercise to keep all the refrigerator doors open to cool off the global warming. We’d have to worry a few notches higher about the excess of freon  eating up the ozone layer. Right, take your pick.

I felt the trees’ blood seep through the layers of my working gloves.

I picked up another stately piece of beech. It would have almost pulled me down. These one-yard split logs were heavy with their sap. They were as heavy as a “wet corpse,” the locals might have said. Too bad, these trees should have had much more time to grow. The tornado mowed them down.

What will we do? Can we change our habits? How?